The last two weeks have been a manic blur of fun, meeting friends, train frustration, award nominees, artwork, dizzyness and desperately trying to get something to dry! 😀

This year I was humbled and honoured to be shortlisted as Best Artist in the 2018 British Fantasy Awards, held on the last day of FantasyCon in what is always a fun awards ceremony. This year it was held in Chester, a town drenched in Roman history that I’d never been to before. The Queen hotel where the event was taking place was COLOSSAL! You kind of felt that you had dropped into Pan’s Labyrinth itself!

I was staying at the hotel in a beautiful Chinese decorated room with a shower door that didn’t close properly and a Nespresso machine, so despite flooding the bathroom floor twice I at least started every day fully caffeinated!  🙂

FantasyCon itself was a manic blur, but in the nicest way. Meeting up with most of my fellow Grimmies (Sammy, Jo, Roz, Steven P, Steven G, Pete, Kate, Joel, Jason) and seeing other friends (Adele, Chloe, Juliet McKenna, Cheryl, Rosa, Anna Smith-Spark, Anne Stephens, Jen Williams – such cool people!) is always so lovely.

The Grimbold Books table looked fab, (we have SO many awesome books!) and the panels I went to were so interesting. There were many highlights, but for me it was probably the panel on artists working in the SFF genre, as an illustrator myself I was keen to hear author and publisher thoughts on artwork in books and the process of using an illustrator.

I was flabbergasted though when Joanne Harris (of Chocolat fame) came into the room and sat down as a panellist! She wasn’t on the programme at all so it was a fab surprise and yes, I had to blurt out in a geekish fashion that “I love your books!”. 😀  Ian Whates, head of NewCon Press, was there as the panel moderator and hearing his thoughts on commissioning illustrators and artwork was really interesting. SUCH an incredibly useful talk and at the end of it I actually got to speak to Joanne Harris and give her my business card – it seems she’s on the look out for an illustrator for her next book! Eeeek! Fingers crossed! I also got to chat briefly with Ian Whates and his wife from NewCon who are always looking for new illustrators to use too, so some really useful contacts made there! He he he!

The only irritation, and I know I sound like an old fart here, is that a young 17ish kid decided to gravitate towards me, showed me her (ahem) drawings, which I dutifully smiled, nodded and praised, then continued to draw throughout the panel, not listening to what was being said and actually kept interrupting proceedings to languidly talk about her father writing a poetry book that she did some drawings in!!!!! WTH? If you’re going to be rude enough to interrupt rather than listen, then at least ask a question about what was being said, don’t interrupt in a totally inane and bizarre manner! Ian and Joanne were incredibly sweet and kind natured over the whole thing and probably guessed as did I, that this young girl had some problems. Hey ho. 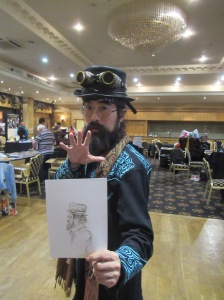 But that’s the great thing about Cons, not only are you meeting friends, making new ones, soaking up the creative atmosphere like a sponge, making connections and contacts, expanding your own business reach and hanging out with lovely like-minded folk, but cons are incredibly welcoming and open to everyone, that’s their strength, so you get to meet people who may not ordinarily cross your path which is always very cool! 😉

FantasyCon ended in the awards ceremony and no, I didn’t win Best Artist. That accolade went to a very well established American illustrator from New York, Jeffery Alan Love, who has won several other awards and whose work is great. I was disappointed naturally but really didn’t expect to win so it wasn’t a surprise. I was just genuinely chuffed to bits to be shortlisted amongst such amazing artists! I was also thrilled that Jen Williams won Best Fantasy Novel for Ninth Rain, Well done Jen! 😀 ❤

FantasyCon ended I only had a few days breather before BristolCon, where I was exhibiting my artwork in the Art Room there. I showed a selection of my fantasy maps, silk paintings (many of them SFF themed) and my portraits which I set up on the Friday before the Con.

I decided to show my portraits in a Game of Thrones style ‘Wall of Faces’ or ‘Rogue’s Gallery’ again but with new portraits in, including one of fab sci-fi writer, Gareth L Powell who spotted himself! 🙂

To add to the manic art making, I’d been asked by Vice Chair, John Bavistock in August to do a secret portrait of BristolCon’s Guest Of Honour this year, my lovely mate Joanne Hall (who is not only a kick arse uber-talented writer, but actually ran BristolCon for 8 years!).

It took me about 4 weeks of full on painting to complete as, to make it extra special, I decided to do an oil painting portrait on canvas rather than my usual pencil portraits. Lol, BUT, that meant I HAD to get it finished before I left for Chester to give it a week and a half to dry in time for BristolCon! Hairdyers were definitely used in the last manic hours! 😀

BristolCon went brilliantly well as did the Silk Painting Workshop I ran there, where my lovely 5 students produced some gloriously wonderful silk paintings, and yes I’m looking at you Roz Clarke & Rosa – your work was sublime!!!!! ❤ It was lovely to see fellow Grimbold Books mate, Pete Sutton launch his awesome new book, Seven Swords, which I can’t wait to read (having been mesmerised by Pete’s short story collection A Tiding of Magpies which I read on the train home from Chester) and it was fab to watch the Q&A panel with Roz grilling Jo on subjects as diverse as writing, running BCon, life on the farm etc.

But I admit my highlight was seeing Jo being honoured as Guest of Honour for all her incredible hard work over the last 8 years as well as her amazing writing achievements…and seeing her reaction to her surprise secret portrait was just comedy gold!!! 😀 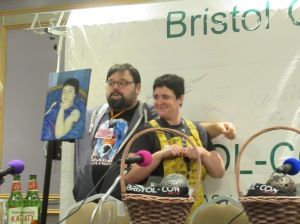 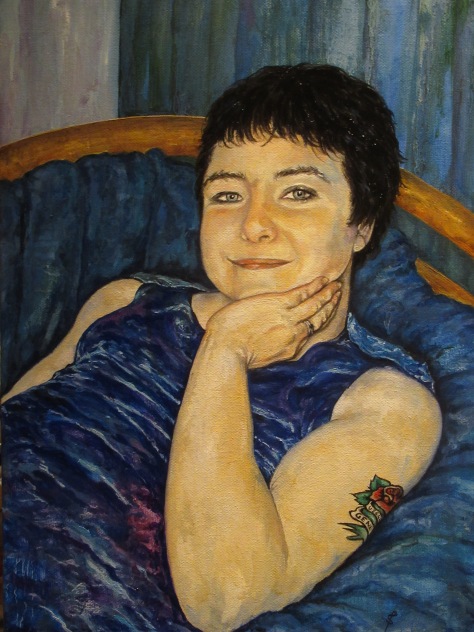